Interview with EU Currency Commissioner Rehn: 'There Is a Certain Aid Fatigue in Northern Europe' 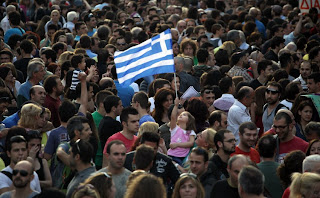 Many in Europe assume that Greece will ultimately have to default on a portion of its debt. In an interview with SPIEGEL, European Monetary Affairs Commissioner Olli Rehn, however, insists that debt restructuring is not on the agenda. He also discusses reports that Athens is considering a return to the drachma.

SPIEGEL: Mr. Rehn, your Greek colleague on the European Commission, Maria Damanaki, said last week that either Athens and its lenders agree to tough sacrifices, "or we return to the drachma." Did she merely say what everyone is thinking?

Rehn: The public misunderstood my colleague's statement. She was trying to encourage her countrymen to implement the austerity program so that Greece can remain a member of the euro zone.

SPIEGEL: So you are no longer ruling out a return to the drachma?

Rehn: I do not see a withdrawal from the monetary union as a serious option. It would harm the Greek economy and be a setback for European integration. The euro is more than a currency; it's the central political project of our community. For this reason, too, we would not accept a Greek withdrawal.

SPIEGEL: But the Greeks themselves have played out the scenario of reintroducing the drachma.

Rehn: All I can say is this: I am not aware of it. We in the Commission and in the euro group are not working with such a scenario.

SPIEGEL: Then let's put it this way: What do the Greeks have to do to avoid a withdrawal from the euro zone?

Rehn: We expect Athens to do its homework, which includes reducing its deficit and privatizing government assets worth €50 billion ($71 billion).