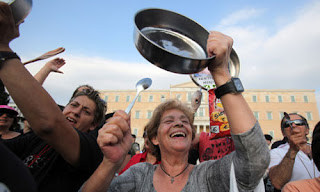 The banner flapped in the wind for almost a week surviving the rigours of sun and sudden downpour. But as thousands of Greeks last night flooded into Constitution Square, Athens' main meeting point, protest ground and central piazza, the fading slogan summed up the mood of the nation at the centre of Europe's debt crisis.

"We want our life, we want our happiness, we want our dignity," it declared. "So out with the thieves and out with the IMF." A year after it was forced to accept the biggest bailout in western history a new and fearless spirit is stalking Greece, clogging its city centres, bringing traffic to a standstill and putting authorities on alert.

In Athens, the spirit takes hold just before the sun has set. It is then that Greeks, young and old, married and single, employed and unemployed flood the square in a wave of protest against the austerity and recession that has brought their country to the brink of despondency and despair.