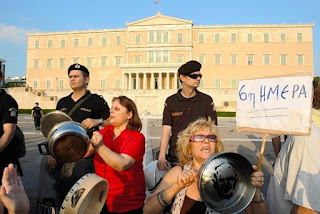 Germany is considering dropping its push for an early rescheduling of Greek bonds in order to facilitate a new package of aid loans for Greece, according to people familiar with the matter.

Berlin's concession that it must lend Greece more money, even without burden-sharing by bondholders in the short term, would help Europe overcome its impasse over Greece's funding needs before the indebted country runs out of cash in mid-July.

But some officials in Berlin hope that a short-term fix can be found that would allow a full deal including a bond rescheduling later this year.

Euro-zone officials have acknowledged for weeks that Greece will face a shortfall in financing of around €30 billion ($43 billion) a year in 2012 and 2013—even after a €110 billion bailout agreed last year. But agreement on how those gaps should be filled is proving difficult, thanks to growing political opposition in northern Europe to bailouts of profligate countries such as Greece.

Germany has for weeks argued that private investors in Greek bonds should, in some way, bear part of the burden of any new bailout package for Athens. But the European Central Bank staunchly opposes any form of debt restructuring. Meanwhile the International Monetary Fund is demanding clarity on Greece's 2012 funding before it releases money that Greece needs to get through this summer. 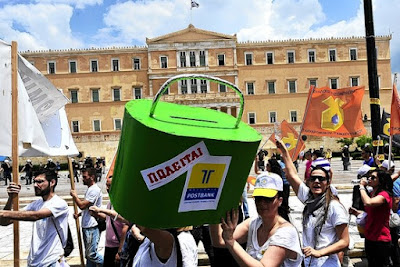 Posted by Yulie Foka-Kavalieraki at 1:57 AM