Back to the Drachma

If Greece doesn't get another rescue package, it will be in default by mid-July. With two-year Greek bonds fetching yields of 26%, markets are telling the Greeks that bankruptcy is precisely what they expect, never mind whether the euphemism to be used is "restructuring" or "reprofiling."

Like previous rescues, the next one—and the one after that—will merely postpone Judgment Day. Ultimately there are three possible outcomes to Greece's current predicament: 1) Europe bleeds forever, treating Greece as a permanent welfare case; 2) The EU swallows Greece's default, or "reprofiles" the Greek debt—the international equivalent of Chapter 11 bankruptcy; 3) Greece abandons the euro.

Which is the least-bad option? Forget the dole. Aching under their own spending cuts, Europe's richer nations won't keep paying for Greece sine die. "Why should we scrounge, while others squander?" is the sentiment driving voters into the arms of populist parties from France to Finland. Even if keeping Greece on the bailout drip were economically feasible, it has become a political impossibility. 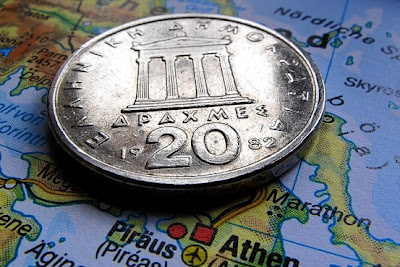 Posted by Yulie Foka-Kavalieraki at 10:39 AM