European Union talks on Greek debt as IMF flies in 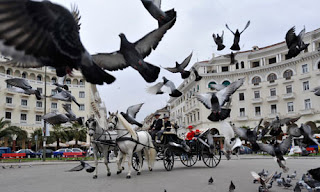 The European Union is engaged in frantic behind the scenes talks to reduce Greece's debt as international monitors fly into Athens this week. There is growing concern that the eurozone's weakest state will be unable to end its worst crisis in decades, without a sovereign default.

Plans to buy back Greek debt at a discount – a scenario that economists call restructuring by stealth – are being given "urgent consideration," bankers and EU officials say.

The three-stage scheme, which has dominated fringe debate at Davos, would allow the near-insolvent country to purchase Greek bonds owned by the European Central Bank at 75% of their nominal value by borrowing from the European Financial Stability Facility, the bloc's rescue fund, at depressed market rates.