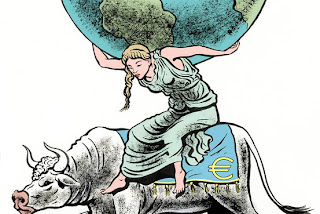 After many years of lectures from Europeans about the superiority of their economic and social model, it is tempting for Americans to derive some satisfaction from the Continent's present sovereign-debt crisis. However, such a reaction would be misplaced, given that Europe's debt crisis has the potential to derail the fragile U.S. economic recovery. Even more disturbingly, Europe's crisis could revive political ghosts in a vital region of the world that today shares America's commitment to freedom and democracy.

The underlying causes of Europe's debt crisis are the large budget deficits that developed over the past decade in Greece, Ireland, Portugal, and Spain. Whereas euro-zone rules prohibit budget deficits in excess of 3% percent of GDP, by 2009 Greece's budget deficit had exceeded 15% of GDP, Ireland's and Spain's had both surpassed 11%, and Portugal's was more than 9%. These large deficits contributed to wage and price inflation in these countries that has rendered them uncompetitive in international markets.

Locked into the discipline of the euro, Portugal, Ireland, Greece and Spain cannot resort to inflating their way out of debt. Nor can they attempt to devalue their currencies so as to make their exports more attractive abroad and thus offset the impact of the fiscal retrenchment being imposed on them by the International Monetary Fund.

Attempting to tighten their budgets without weakening their currencies is, necessarily, a recipe for steep recession in these countries. Sadly, Greece and Ireland are already finding this out. Over the past two years, GDP has contracted in Greece and Ireland by 5% and 12%, respectively, and their unemployment rates have both climbed beyond 14%.