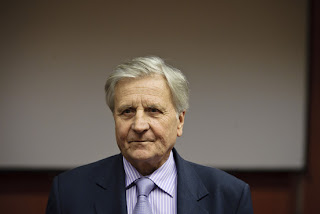 European Central Bank President Jean-Claude Trichet defended his hard-line stance on fiscal policy and inflation, saying budget austerity and vigilance in the face of rising energy and commodity prices are the best path to economic recovery.

In an interview with The Wall Street Journal ahead of this week's annual meeting of the World Economic Forum in Davos, Switzerland, Mr. Trichet warned that inflation pressures in the euro zone must be watched closely, and urged central bankers everywhere to ensure that higher energy and food prices don't gain a foothold in the global economy. He signaled that he won't let the economic weakness in Greece, Ireland and other countries on Europe's troubled fringe delay ECB interest-rate increases if he sees threats to price stability.

"All central banks, in periods like this where you have inflationary threats that are coming from commodities, have to…be very careful that there are no second-round effects" on domestic prices, Mr. Trichet said from his 35th-floor office at the ECB's Eurotower headquarters overlooking Frankfurt's financial district.

Read the interview
Posted by Yulie Foka-Kavalieraki at 9:04 PM