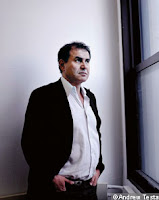 The contagion from the Greek and Irish crises has spread to Portugal, Spain and possibly Italy. Unless the eurozone undertakes radical reform there is a risk of disorderly defaults by fiscally stressed member states and even – eventually – of a break-up of the monetary union.

The current muddle-through approach to the crisis is to “lend and pray”: ie, provide financing to member states in distress (conditional on such states implementing fiscal adjustment and structural reforms) in the hope that their problems are of liquidity rather than solvency. But this could lead to disorderly defaults and a break-up of the European Monetary Union (EMU), unless institutional reforms and other policies leading to closer integration and restoration of growth in the eurozone’s periphery are implemented soon.

More
Posted by Yulie Foka-Kavalieraki at 12:57 AM