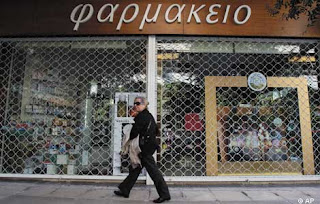 Greece’s pharmacy owners, lawyers and civil engineers are staging rolling strikes to protest against the opening up “closed-shop professions” under the terms of its €110bn bail-out loan.

The walk-outs started on Wednesday as George Papaconstantinou, finance minister, unveiled a draft bill to liberalise about 150 closed shops, from taxi drivers and street vendors to auditors and architects.

The struggle to carry out reforms agreed with the European Union and International Monetary Fund has been marked by strikes and street protests that have at times turned violent.

Greece’s socialist government is on track with its targets, after cutting the budget deficit last year by an unprecedented 6 percentage points of gross domestic product to 9.6 per cent of GDP. Structural reforms have proved harder to implement as vested interest groups fought to protect their privileges.

More
Posted by Aristides N. Hatzis at 3:44 AM