Greek Americans love their homeland, but there are limits 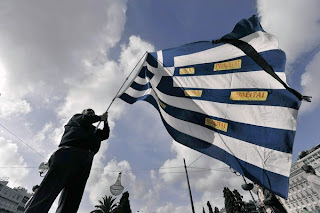 Just before dawn in New Jersey 40 years ago, Nick Paravalos jumped ship, sneaking toward an American dream that he had nurtured for decades, leaving Greece behind for good.

Starting with $20 in his pocket, the Piraeus-born seaman began to bounce from job to job, washing dishes and busing tables for years before settling in upstate New York, marrying, and setting up the first of three diners in the sleepy town of Scotia.

The tale is a template of the American promise of upward mobility, one that millions of hardworking immigrants have realized in the course of several generations. But for Paravalos and his 2.5 million compatriots in scores of cities across the United States, heart-swelling national pride and nostalgia for the old country linger.

"No one leaves [Greece] without dreaming of going back," the 64-year-old retired restaurateur said during a recent telephone interview. "And even if it doesn't happen, our heart is always with the patrida, our homeland."

For Greek officials struggling to fix the nation's broken economy and technocrats aggressively tapping all sources of financing to avert Europe's first default on a country's national debt, no other words and sentiments could sound sweeter these days.