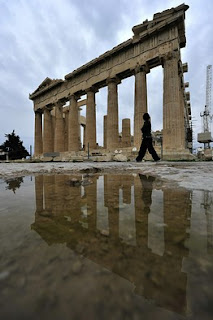 Pity the average Greek. Almost a year after living through the biggest sovereign bailout in history, things in Greece are really starting to fall apart now.

For the past two weeks, pharmacists, lawyers, engineers, Indian chiefs, the list goes on, have all been staging various walkouts and strikes that have raised the misery index for the average man on the street. Many more protests are sure to follow. The reason: a government plan, demanded by Greece’s international creditors, to sweep away the breathtaking raft of protections on a 150 odd closed-shop professions.

In the process, a lot of once sacred cows in Greece’s heavily overregulated economy are being led to slaughter.

The sheer number of regulations governing business in Greece is staggering. And the rules are, in many cases, just plain silly.