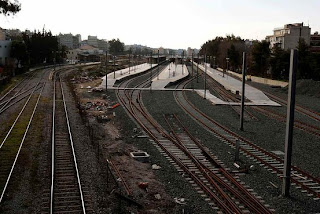 After a year full of strikes protesting reforms and budget cuts, Greece is bracing for more unrest.

The Socialist government's efforts to liberalize the country's hidebound service industries is threatening to provoke a storm of protests from groups ranging from taxi drivers to bakers.

Early next month, the Greek parliament is expected to vote on legislation that would abolish regulations on up to 150 cosseted professions. The proposed law would sweep away rules that govern everything from minimum fees to geographical restrictions and the number of permits issued each year.

The focus is mainly on a handful of key sectors—such as lawyers, auditors, engineers, architects and notaries—but the scope of the plan promises to completely shake up the Greek economy.

More
Posted by Yulie Foka-Kavalieraki at 9:45 AM