Greece: In at the deep end

"Just one?" said the man at Athens airport with stagey concern, when I asked for a ticket to the port. Greeks seem upset by single travellers. They're a family-loving nation, happiest when their tourists, particularly female ones, are shackled to a significant other or part of a jolly group.

I assured him I wouldn't be alone for long. I would be joining 10 others to swim around the Minor Cyclades – a cluster of tiny islands, including Naxos, Mykonos and Santorini. Baffled by the very idea, he winked, waved me on and yelled, "Next!"

I've never been drawn to organised group trips, let alone their terrifying cousin, the singles holiday. During periods of singledom – I've been in one for a year – I'm either a happy solo traveller or I've holidayed with friends and family. But this time my brother and family, with whom I went away last summer, were off with fellow young parents; friends were working or saving money; and the willpower to head off on my own again, eight months after a solo trip, had momentarily deserted me. 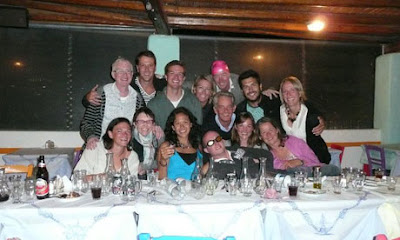 Posted by Yulie Foka-Kavalieraki at 1:09 PM