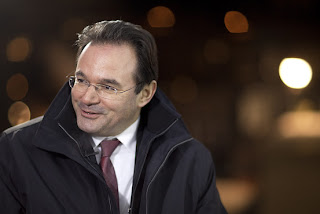 Discussions are under way on an initiative that would allow the Greek government to buy back debt with help from the European bailout fund, Greece's finance minister said Friday, amid signs that Europe is preparing a far-reaching solution to the country's debt problems.

"It is one of the ideas that are on the table," Finance Minister George Papaconstantinou said in an interview. "It deserves to be discussed, together with other ideas, but there is no specific plan at this point."

Since late last year, European governments have been discussing plans to beef up Europe's new, emergency-financing mechanism, the European Financial Stability Facility, to lend money to euro-zone countries in need of cheap loans.

Under the scenario now being discussed, the EFSF, which has a triple-A credit rating, would borrow from the international markets and lend money to Greece. The loan would be given at a rate significantly below what Greece—now rated at junk status by all three of the world's leading ratings agencies—would pay on the markets.

With that money, Athens would be able to buy back an estimated €50 billion to €60 billion in Greek government bonds thought to be held by the European Central Bank, which bought the debt on the secondary market as part of a program to support the Greek bond market.

More
Posted by Yulie Foka-Kavalieraki at 12:54 AM