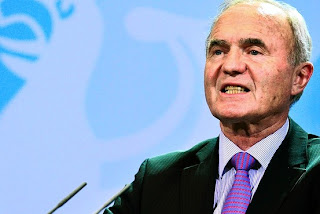 It looks like the European Union is settling on a strategy to save the euro. It's called extend, pretend... and pray.

Negotiations are under way to make permanent the European Financial Stability Facility (EFSF), the bailout fund launched last year as a temporary backstop to deal with sovereign debt crises ripping through the euro zone.

Not only that, but there's talk of increasing the quantity of funds the EFSF can lend.

As it stands, the EFSF is funded to the tune of €440 billion ($588 billion), but credit guarantees imposed on it mean that only about €250 billion can be disbursed. Some EU members are looking at ways of making the full €440 billion available, unless, that is, the fund can be boosted even further. They're also hoping it'll be used to buy government debt from fragile sovereigns.

The markets like what they're hearing. But the optimism is overdone.