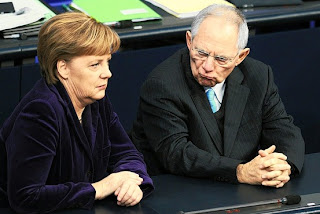 German leaders are divided over whether to boost the bailout fund for euro-zone countries, amid growing calls from other European leaders to greatly expand the currency bloc's safety net.

German Finance Minister Wolfgang Schäuble voiced support for changes that would significantly raise the bailout fund's true lending capacity, which is currently much lower than its headline €750 billion ($985 billion) size due to quirks in its fine print. "We must discuss whether it wouldn't be right that €750 billion is actually available" as rescue loans, Mr. Schäuble told foreign correspondents in Berlin on Thursday.

Doing so wouldn't amount to increasing the fund, Mr. Schäuble argued: It would merely fulfill a pledge Europe made in May of last year. But it would require considerably beefing up the main part of the safety net with extra credit guarantees or capital from euro-zone governments, he said.