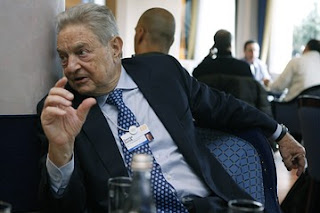 That’s the moderately apocalyptic message George Soros has chosen to bring to this year’s Davos boondoggle.

It’s not the first time Soros has delivered this warning, but it comes at a time when euro-zone policy makers appear to have had some success in convincing nervous investors that the currency area can deal with its debt problems.

Soros doesn’t disagree, telling the BBC that, narrowly defined, “the euro crisis is on the way to being solved.”

But he argues that the way in which euro-zone policy makers are addressing investor concerns is sowing the seeds for a future crisis, one that threatens the European Union. For Soros, the burden of repaying very large debts will be so great for Ireland, Greece, Portugal and others that it will create a “two-speed Europe,” and political tensions that could at some point force some of those countries out of the bloc.

More
Posted by Yulie Foka-Kavalieraki at 11:07 AM