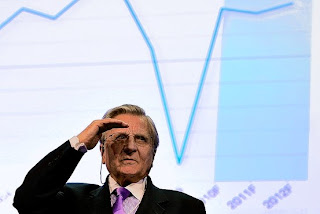 Euro-zone governments will increase the lending capacity of their bailout fund and make it more flexible, but governments won't raise its current €440 billion in guarantees, European Economics Commissioner Olli Rehn said in an interview Thursday.

The likely decision may raise questions about whether there will be enough in the pot to ease doubts about the fund's ability to provide emergency finance for Portugal, Spain and other countries that might need it.

Some governments had wanted €1 trillion in guarantees to reassure financial markets. If the plan is agreed to, there should be a total of close to €700 billion available, if lending from the International Monetary Fund and the European Union is included.

The bailout funds are needed to shore up confidence in the European common currency. In a speech in Davos, French President Nicolas Sarkozy was emphatic in his defense of the euro, saying that those who were forecasting its demise "misunderstand" the nature of Europe. "The euro is Europe, and Europe is 60 years of peace on our continent," Mr. Sarkozy said, adding in his own name and that of German Chancellor Angela Merkel that "we will never turn our backs on it, we will never abandon it."