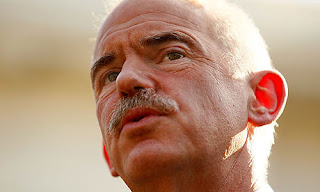 A general love-in panel discussion on the future direction of Europe was enlivened when the Greek prime minister, George Papandreou, started issuing dire warnings about cutting back welfare systems too much. Noting widening extremes in wealth and poverty, he predicted a tipping point. "We could see more nationalism, more racism, more fundamentalism, more violence," said the Greek leader, urging adherence to Scandinavian-style welfare. "In the Nordic model, you take leaps of faith but there's a net there when you leap." Sitting next to him, Nick Clegg, fresh from boasting about Britain's cuts, looked a tad uncomfortable.