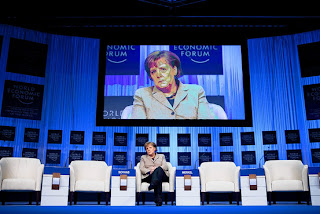 Some of the world's leading bankers are pushing for the euro zone to embark on a newly aggressive effort to defuse Europe's simmering debt crisis.

A group of about 40 chief executives of top U.S., European and Asian banks gathered Thursday in this ski resort for a wide-ranging, more-than-five-hour discussion and debate about the euro zone and other global issues.

The consensus among at least some of the CEOs was that European governments should adopt a "shock-and-awe" approach to the sovereign-debt crisis, according to executives who attended the meeting on the sidelines of the forum. "The question was: how can you stop the euro-zone problem from becoming a chronic problem?" one CEO said, adding that the group believed the crisis has moved beyond its acute phase.

Among the recommendations: a massive new program that could purchase outstanding government bonds issued by financially shaky countries on Europe's periphery. One CEO said such a pool could be as large as €200 billion ($275 billion).

Separately, Greek Finance Minister George Papaconstantinou said discussions are under way to let the Greek government buy back debt with help from the European bailout fund, allowing Greece to re-enter the bond market. "It is one of the ideas that are on the table," Mr. Papaconstantinou said.