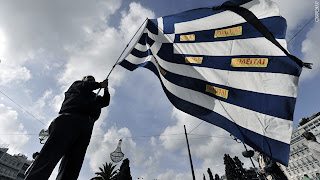 More than 5 million Greeks did not pay income taxes for 2008, according to public documents released by the struggling nation's finance ministry.

More than six in 10 taxpayers earn less than 12,000 euros per year and are not required to pay income taxes under the Greek tax system, the press office of the Greek Ministry of Finance said Thursday.

However, there is wide speculation that many Greeks are not accurately reporting their income.

Most workers and professionals earned more than 12,000 euros in salary in 2008, according to the data provided by the Finance Ministry this month. The average salaried income was 19,234 euros for taxpayers and professionals earned 29,569 euros on average for the year. Farmers, ranchers and fisherman made 11,500 euros per year on average, but those workers only accounted for 390,000 people in the workforce.