What happened next? Greek protests

Stephen Moss visited Athens in May during violent clashes when three people died. This month he went back to see whether calm has returned to the city.

Naturally, I have come back looking for trouble. So it is a little disappointing that the first thing I see in Syntagma Square – the constitutional heart of Greece and the scene of violent demonstrations in the spring when parliament voted through an emergency austerity programme – is a small red tourist train with a dozen or so passengers aged from eight to 80 waiting to take a ride at dusk. Athens's numerous police, in their bafflingly varied uniforms, look bored.

The following day is more like it. There is a demonstration to mark the second anniversary of the death of 15-year-old Alexandros Grigoropoulos, who was shot by a police officer in the Exarchia district of central Athens in December 2008, triggering a wave of violent protest across Greece. By late-afternoon the memorial march has given way to mayhem. Rocks are thrown, shop windows broken, bus shelters set alight; a man mistaken for an undercover policeman is attacked; three handcuffed youths with bloodied faces sit on a kerb; when one gets up, a policeman kicks him to the ground. Welcome to Athens, home of Socrates and, as one local describes it to me, capital of the Balkans.

"If someone from Munich came to live in Athens, they would think this was a chaotic city," says investment expert Aristos Doxiadis, "but we're used to the centre of the city closing down once a week. It's not new for us." 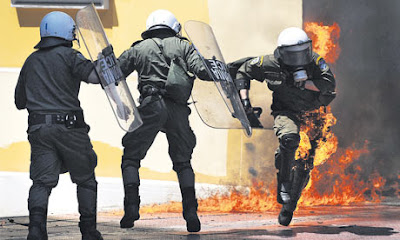 Posted by Yulie Foka-Kavalieraki at 7:42 PM