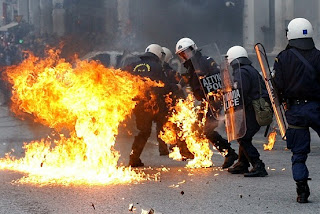 Hooded youths attacked police with petrol bombs and flares and a former conservative minister, Kostis Hatzidakis, was attacked while trying to exit from the parliament building.

The anarchists threw rocks at the lawmaker and he was chased and beaten with sticks. Pictures showed him bleeding from a wound apparently to his head. He eventually took flight and escaped into a nearby building.

A witness said more than 150 protestors were involved in the attack on the minister. The witness said they shouted: "Thieves, thieves, shame!", but that it was directed at the whole of parliament itself rather than Mr. Hatzidakis directly. 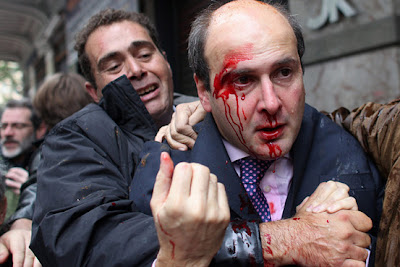 Posted by Yulie Foka-Kavalieraki at 4:49 PM