Is it true that the three basket-case countries of Europe - Greece, Ireland and Iceland - have outperformed Germany on real GDP and productivity growth? Or do the implausible official numbers demonstrate the bankruptcy of the global economic statistical system?

I was nosing through the just-released OECD Economic Outlook (top secret project, don’t ask), and I noticed something very interesting. The outlook includes forecasts through 2012 for all sorts of macroeconomic variables, so we can now look at a 15-year time period (1997-2012) which includes 10 years of tech+housing boom (1997-2007) and the five years of the financial bust. Here are two charts comparing the strongest economy in Europe, Germany, with the three basket cases, Greece, Ireland and Iceland. We’re looking at real GDP growth and total economy labor productivity growth: 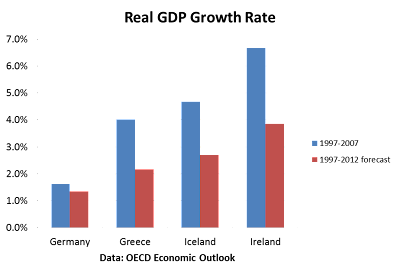 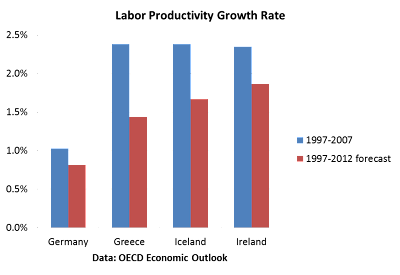 These charts show that the three basket-case countries of Europe - Greece, Ireland and Iceland - substantially outperform Germany during the boom years, which is to be expected (blue bars). For example, Greece had productivity growth averaging 2.4% per year from 1997 to 2007, compared to only 1% per year for Germany.

What is more surprising is that Greece, Ireland and Iceland continue to outperform Germany, even when we factor in the five years of the bust, including forecasts through 2012 (the red bar). For example, average real GDP growth in Iceland is projected to be 2.7% annually over the 1997-2012 time period, almost double the 1.4% growth rate of Germany.