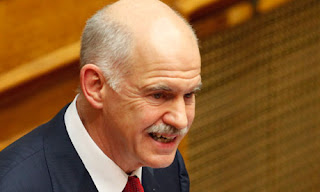 Greek unions vowed to step up the relentless stream of protests that have paralysed the debt-stricken country in the run up to Christmas, after parliament approved an austerity budget described as the toughest since the second world war.

The spectre of yet more strikes came as prime minister George Papandreou pledged to push ahead with the unprecedented economic reforms dictated by the EU and IMF as part of the €110bn (£93.5bn) bailout. In a display of his determination to override growing dissent within his own party over the measures, the socialist leader insisted he would not waver.

"We will not go bankrupt," he said addressing the 300-seat house ahead of the crucial vote. "We will do whatever it takes to succeed. We will change this country."