Greek deficit much bigger than estimate 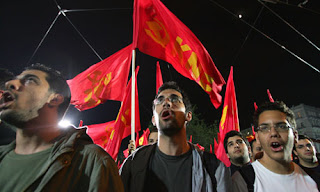 Greece's goal of reducing its gargantuan debt received a fresh blow today when the EU statistics agency announced that the country's 2009 budget deficit was much worse than first thought.

Six months after Athens received €110bn (£93bn) in emergency loans from EU nations and the International Monetary Fund to prop up its near-bankrupt economy, Eurostat revealed that Greece's budget deficit reached 15.4% of GDP last year, substantially higher than its previous estimate of 13.6%.

In April, Eurostat had estimated the debt-to-GDP ratio would reach 115.1%. The revised data meant that Greece's debt ratio has eclipsed those of every other EU state, officials said. By the end of 2009, its debt is projected to account for 126.8% of GDP.

Greece's poor bookkeeping was blamed for the budget black holes.