It began as a fiesta, a mass march in the sun against the deflationary programme the Greek people are being told can alone save their country. At 10 on Wednesday morning, Klathmonos Square in Athens was filling with protesters. A union official was making an interminable speech (Greeks never use one word when 300 will do), and music was blaring out of vans – those Chilean-style revolutionary songs without which no demo is complete: "The people, united, will never be defeated." Not today, anyway.

People had said there would be no violence – or at least if there was, it would be "ritual" violence: a broken window here, a wrecked ATM there. One Greek journalist had told me the protests so far had been subdued – "equivalent to what would normally happen here if the electricity board sacked a few people". He said the public were resigned to the economic hardships to come – salaries of state employees cut by 25%, pensions to fall by 15%, unemployment likely to rise to 18% – and that they recognised the only alternative was national bankruptcy; not just junk bonds but a junk country.

A few hours later, three bank workers, one a woman who was four months pregnant, lay dead in a burnedout bank on Stadiou Avenue, the victims of anarchist firebombs. Ritual violence this was not, and by Wednesday evening Athens feels drained and lifeless. "This will make people stop and think," teacher Anna Tsiokou tells me, as we stand beside the police cordon on the edge of the area where the firebombing had occurred. "The demonstrations will have to stop for the moment. We have legitimate grievances, but the anarchists are using the crisis for their own ends." 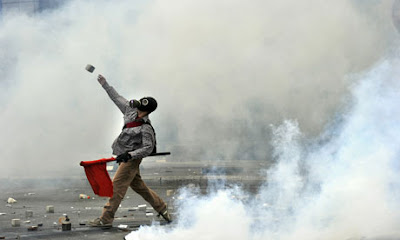 Posted by Yulie Foka-Kavalieraki at 7:41 PM