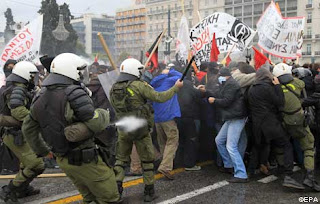 Protesters threw firebombs at a luxury hotel and burned several cars outside parliament after the biggest anti-austerity demonstration in Athens since last May turned violent.

The incidents followed a march by more than 20,000 trade unionists protesting against cuts in wages and allowances for workers at 50 public sector corporations, approved by parliament on Tuesday night.