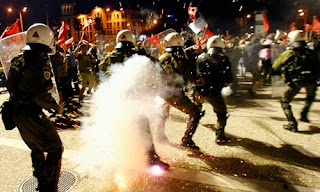 Stung by fury on the streets, criticism within his own party and rising poverty, the Greek prime minister, George Papandreou, addressed an emergency session of his socialist MPs yesterday as parliament prepared to debate one of the toughest budgets in the near-bankrupt nation's modern history.

Amid mounting hostility over austerity measures that last week sparked some of the ugliest scenes of violence since the eruption of Europe's debt-crisis in Athens, he appealed for calm in navigating what he has increasingly come to call a "state of war".

"These are critical times for Greece," said Kostas Panagopoulos, a political analyst. "It is going through its worst period in 30 years."