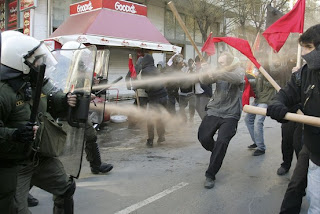 Workers at Greek public-transport companies walked off the job Thursday in a 24-hour strike that has led to early-morning traffic chaos on the streets of Athens.

During the morning rush hour, television images showed traffic jams stretching for kilometers on various main arteries of the city as Athenians resorted to private transport to get to work.

The strike, which has affected bus, trolley, tram and subway services, is the second all-day strike by public-transport workers this week and comes after a nationwide general strike Wednesday that paralyzed the country and led to violent protests in Athens. Rail workers at the national railroad company, OSE, are also striking Thursday.