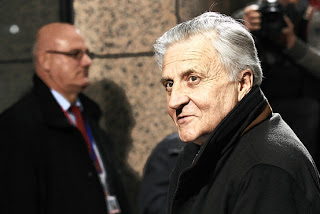 On May 6, top officials of the European Central Bank were sitting down to dinner with their spouses in the elegant Emperor's Room of the Palacio da Bacalhoa, a 15th-century estate and winery south of the Portuguese capital, when stocks in New York began a terrifying slide.

The bankers' BlackBerrys lit up with frantic notes. The euro was swooning. The Dow Jones Industrial Average had plummeted 1,000 points in the "Flash Crash."

Jean-Claude Trichet, the ECB's president, feared that a fiscal mess in tiny Greece, which had consumed Europe for months, was now touching off another global financial crisis.