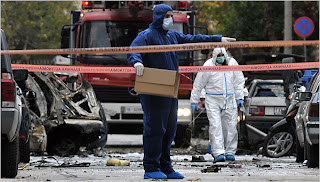 A powerful bomb detonated outside a court building near central Athens on Thursday morning, but warning calls allowed the area to be cleared, the police said. There were no injuries, though the building and nearby cars were damaged.

The blast came as European concerns over the possibility of attacks by Islamist extremists is at a high pitch, but counterterrorism officials here remain focused on anarchists, like the Greek group that claimed responsibility for recent parcel bombs sent to foreign embassies in Athens and beyond. One addressed to the German chancellor, Angela Merkel, reached her Berlin mailroom.

More
Posted by Yulie Foka-Kavalieraki at 10:46 AM