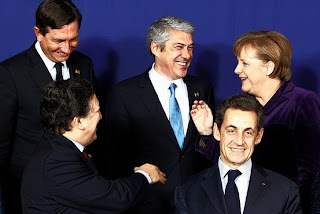 Europe's leaders endorsed plans for a new fund to rescue indebted euro-zone countries, and proposed treaty changes to make that possible, but failed to resolve deepening disagreements over whether more radical action is needed to quell a debt crisis that has raged on the region's fringe for more than a year.

Meeting in Brussels for the final 2010 summit, European Union leaders agreed to replace the region's emergency rescue fund, which ends in 2013, with a permanent crisis-finance program.

But the crisis gripping the weaker governments of the euro zone showed no signs of abating. On Thursday, Spain was forced to offer significantly higher interest rates at a debt auction Thursday than it paid just a month ago. Bond markets fell across Europe.