As Ireland Flails, Europe Lurches Across the Rubicon 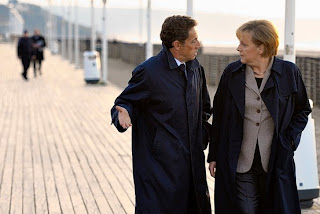 On Oct. 18, Angela Merkel and Nicolas Sarkozy took a sunset stroll on the beach of this chic casino resort (Deauville, France). Five months earlier, Europe had committed more than $100 billion to rescue Greece. Now the Continent's debt crisis was moving on to Ireland, and the German leader worried Berlin would have to foot the bill for this and future bailouts.

"Angela, I'm going to help you," the French president said, before they set out for the boardwalk. The air chilled, so Mr. Sarkozy ordered an aide to fetch Ms. Merkel's coat. The lights of the palatial casino flickered in the distance.

The two leaders had a risky plan: The Deauville pact, sealed that evening, called for investors holding bonds in insolvent euro-zone nations to shoulder losses on them, starting in 2013. That would instill discipline in profligate countries, but also implied that a Western European nation might default on its debts. That hadn't happened in half a century, and the mere suggestion would shake markets, Mr. Sarkozy's own advisers had warned.