Which Country's Banking System Is Most at Risk?

Previously, we took a look at European banks to see which one had the largest sovereign exposure to Ireland. Here is a very interesting chart from the Bank for International Settlements that shows total foreign exposure to Greece, Ireland, Portugal, and Spain by bank nationality. This is very important because it shows not just sovereign exposure but also total exposure (consumer lending, lending to the public sector, etc). The information is current as of the end of Q1 2010.

The most alarming statistic from the report is that total worldwide exposure to Greece, Ireland, Portugal, and Spain amounts to a whopping $2.6 trillion, which shows that any default could quickly collapse Europe and have significant consequences for the entire world. The two countries who should be praying for a bailout of Ireland are Germany and Great Britain since they are they have the largest exposures. Better fire up those ECB printing presses! 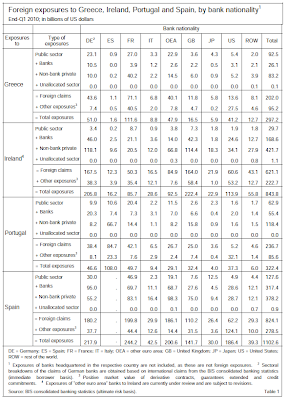