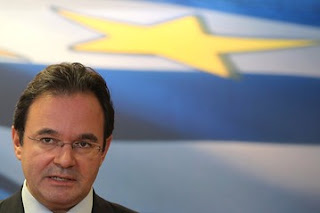 Greek Finance Minister George Papaconstantinou mused on a television program last night that his country might take longer than originally thought to pay back the €110 billion it borrowed from other euro-zone nations and the IMF.

One answer comes in Greece’s monthly budget-execution reports, the most recent of which was released late last night. The upshot: Greece is very far from reaching the government-revenue targets built in to its deficit-reduction plan. Greece simply isn’t raking in enough cash. (On the plus side, at least revenue in September didn’t fall, as it did in August.)

More
Posted by Yulie Foka-Kavalieraki at 2:36 AM