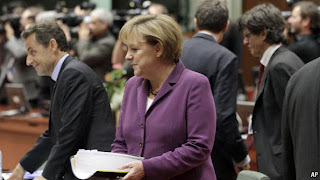 “I am on the whole quite satisfied with the decision.” With these modest words, Angela Merkel, Germany’s chancellor, rounded off a remarkable victory at the end of a bruising European summit that concluded today.

Less than a fortnight ago, members of the European Union were universally opposed to Germany’s demand to reopen the EU’s treaties to strengthen the means of maintaining fiscal discipline among members of the euro zone. But within days of winning over Nicolas Sarkozy to her cause at the Deauville summit on October 18th, she got everyone to sign up to the idea of a “limited treaty change”. By the slow-moving standards of the EU, this happened in an eye-blink. It is a testament to the authority of Mrs Merkel, as well as the power of Germany’s constitutional court in Karlsruhe.

“Everybody was very sensitive to Mrs Merkel’s persuasive arguments,” is how one national diplomat put it. “Bullying,” said another. Whether by persuasion or compulsion, Mrs Merkel secured her main objective: agreement to amend the EU treaty to allow the creation of a “permanent crisis mechanism” to resolve the debt of countries that may be hit by a Greek-style crisis in future.

More
Posted by Yulie Foka-Kavalieraki at 3:17 AM