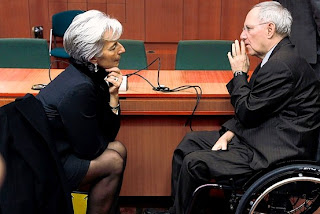 Tiny Ireland and the major powers of the European Union were still engaged in their strange dance last night. The EU and the European Central Bank want the Irish to ask for a bailout. Ireland, crippled by the guarantee it gave its banks and all but bust, says it doesn't need bailing out, thank you very much. Oh yes you do, says everyone else. Oh no we don't, say the Irish, but while you're on the line: what would the terms be?

One has to admire the Irish for their pluck, and for their striving to protect a rather weak negotiating position. If Irish ministers resist they know it would mean the spread of more investor panic to other countries. In theory, this could in time blow up the euro zone, trigger a depression and derail the European project.