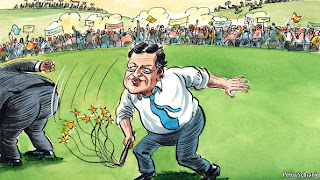 They came to Brussels this week in their tens of thousands, from Finland to Greece, to say no to austerity. Their message was simple: the poor and the workers are being made to pay for the sins of the bankers and the speculators. To judge from some banners, they may have a new category of enemy: Eurocrats.

José Manuel Barroso, president of the European Commission, keeps saying that the days of stimulus spending are over; now is the time for budget cuts. To ensure that members of the European Union maintain fiscal discipline, he proposed on September 29th stern new measures to give the commission power to scrutinise their budgets and impose hundreds of millions of euros’ worth of penalties on the profligate. Even those that pig-headedly refuse to reform their economies could be punished.

For Mr Barroso this “economic governance” is the only way to ensure the survival of the euro. But outside the commission, demonstrators see things differently. To John Monks, general secretary of the European Trade Union Confederation, the EU is turning into a “punishment squad”. Left-wing members of the European Parliament are in a quandary. They want “more Europe”, but in this case more Europe means more austerity.

This year’s Greek crisis exposed the inadequacies of the euro, a single currency without a joint economic or fiscal policy. Trouble in even a peripheral country like Greece, whose GDP is less than a tenth of Germany’s, posed dangers to all. Loose agreements have not proved strong enough to stop reckless behaviour. Sanctions exist, in theory, in the stability and growth pact, which requires euro-area countries to keep deficits below 3% of GDP and government debt below 60% of GDP, but they have never been imposed. Governments have been reluctant to criticise each other in public, let alone to mete out fines.