Is Greece relying too much on taxes to adjust? 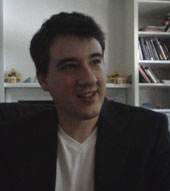 Read the Paper
Posted by Yulie Foka-Kavalieraki at 2:15 PM