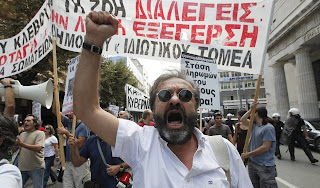 Greek unions are planning protest marches in the northern city of Thessaloniki against the debt-plagued country's harsh austerity program, before Prime Minister George Papandreou's keynote speech on the economy Saturday.

A first taste of trouble came when an elderly man threw a shoe at Papandreou who had just inaugurated an annual trade fair. The projectile landed wide of its target, and police arrested the alleged shoe-thrower.

Separately, around 600 truck owners marched to the fair grounds to protest deregulation of their profession.

About 4,500 police were on duty to keep the peace at three bigger marches in the evening, as past protests have degenerated into riots. In May, three people died in a bank torched by hooded youths who infiltrated a large demonstration in Athens — an action that shocked Greeks and deflated the protest movement.