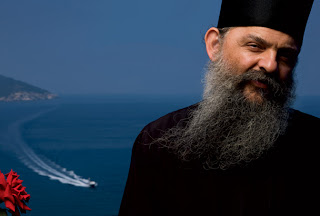 As Wall Street hangs on the question “Will Greece default?,” the author heads for riot-stricken Athens, and for the mysterious Vatopaidi monastery, which brought down the last government, laying bare the country’s economic insanity. But beyond a $1.2 trillion debt (roughly a quarter-million dollars for each working adult), there is a more frightening deficit. After systematically looting their own treasury, in a breathtaking binge of tax evasion, bribery, and creative accounting spurred on by Goldman Sachs, Greeks are sure of one thing: they can’t trust their fellow Greeks.

After an hour on a plane, two in a taxi, three on a decrepit ferry, and then four more on buses driven madly along the tops of sheer cliffs by Greeks on cell phones, I rolled up to the front door of the vast and remote monastery. The spit of land poking into the Aegean Sea felt like the end of the earth, and just as silent. It was late afternoon, and the monks were either praying or napping, but one remained on duty at the guard booth, to greet visitors. He guided me along with seven Greek pilgrims to an ancient dormitory, beautifully restored, where two more solicitous monks offered ouzo, pastries, and keys to cells. I sensed something missing, and then realized: no one had asked for a credit card. The monastery was not merely efficient but free. One of the monks then said the next event would be the church service: Vespers. The next event, it will emerge, will almost always be a church service. There were 37 different chapels inside the monastery’s walls; finding the service is going to be like finding Waldo, I thought.

“Which church?” I asked the monk.

“Just follow the monks after they rise,” he said. Then he looked me up and down more closely. He wore an impossibly long and wild black beard, long black robes, a monk’s cap, and prayer beads. I wore white running shoes, light khakis, a mauve Brooks Brothers shirt, and carried a plastic laundry bag that said eagles palace hotel in giant letters on the side. “Why have you come?” he asked.