What the Greek bailout achieved—and what it didn’t 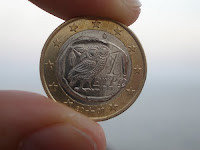 Yesterday, the announcement of a 750 billion euro bailout from the European central bank and the IMF to troubled southern European economies seemed to reassure the markets. The interest rate on Greek government debt fell 5%, the euro gained against the dollar, the spread between German and Spanish bonds shrank, and bank share prices rose by almost 10%. No wonder: 750 billion euros is a lot of money. It’s almost triple the Greek GDP. Bond speculators betting on spiralling southern European debt edged away, acknowledging that the central bank had the money and the will to defend eurozone bond prices.

Unfortunately, $1 trillion doesn’t buy as much reassurance as it used to. Today, the euro is sinking again, and financial markets have opened lower. We should all be glad the European finance ministers who met last weekend had the foresight and courage to put together this unprecedented loan guarantee. Without it, the “PIIGS” nations–Portugal, Italy, Ireland, Greece, and Spain–would have come under enormous attack from speculators. It is not inconceivable the euro could have fallen apart. It didn’t, but the eurozone remains essentially unstable.