Unrest in Greece: Anatomy of the protests 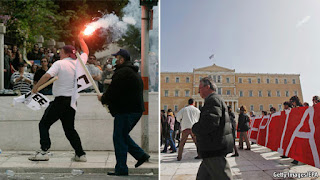 Not all Greece's protestors are the same

Greece's hard-pressed workers are so enraged by the austerity measures their government has imposed on them, as part of an internationally agreed economic rescue plan, that they are venting their rage in any way they can, including acts of violence. This was the impression presented by the images that flashed round the world on May 5th, when a wave of protest in Athens claimed its first lives: three employees of a bank, one of them a pregnant woman, who died when demonstrators set fire to their building.

But according to Michalis Chrysohoidis, who as Greece’s public order minister is responsible for the safety of the country's streets, the story is more complex. In an interview conducted after the protests, the minister distinguished between at least two different groups of people who have been taking to the streets.

More
Posted by Yulie Foka-Kavalieraki at 11:34 AM