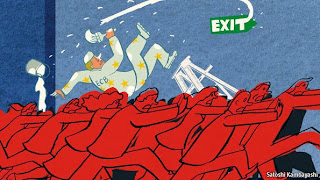 When Europe’s finance ministers emerged in the early hours of May 10th to announce a €750 billion ($950 billion) rescue of the embattled euro zone, some joked that they had thrown everything at the problem “including the kitchen sink”. It turns out there are a few more implements left to hurl.

Germany this week announced a ban on the naked short-selling of euro-area government bonds and shares of some financial firms, and on the buying of sovereign credit-default swaps by investors who have not also bought the underlying bonds. Angela Merkel, Germany’s chancellor, gave warning that the euro is at risk as she defended the ban. If Germany hoped to calm markets, it failed. Shares slipped, as did the euro (see chart). Euro-zone solidarity fractured, too: Christine Lagarde, the French finance minister, said she regretted the decision.

Posted by Yulie Foka-Kavalieraki at 11:32 AM