Lawmakers in Germany Back Rescue for Europe 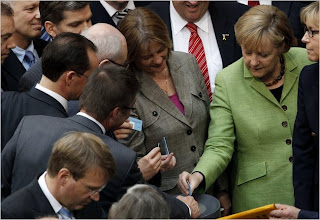 Chancellor Angela Merkel of Germany narrowly pushed the country’s share of the nearly $1 trillion stabilization package for the euro through Parliament on Friday in the face of significant public opposition.

It was an uncomfortably close call for Mrs. Merkel. The bill passed by a margin of just seven votes, with half a dozen members of her conservative coalition voting against it. The left-wing opposition parties refused to support the deal, either abstaining or voting against it.

The vote answered the question, for now at least, of whether Germany is committed to seeking European solutions to the fiscal crisis facing the continent. It came at the end of a week that saw sharp divisions emerge over the German government’s decision to introduce unilateral measures to dampen financial-market speculation, and to do so without consulting its European partners.