On May 12th, the European Commission welcomed Estonia with open arms, recommending that the tiny Baltic country be allowed to adopt the euro next year. That's a far cry from the frosty reception Greece was accorded on May 2nd, when its European partners, plus the International Monetary Fund, promised to pony up $145 billion to rescue that fiscally reckless Balkan nation. Greece and Estonia are truly economic antipodes.

Less than two decades ago, Estonia was in the grip of the Russian Bear and was part of the Soviet empire. All that changed on September 6, 1991, when Estonia's fully independent status was conceded by the USSR State Council. Estonia immediately set out to put its economy on a free-market course. There were no fond memories of the good old communist days, nor were there any illusions about where third-way socialism would take Estonia. 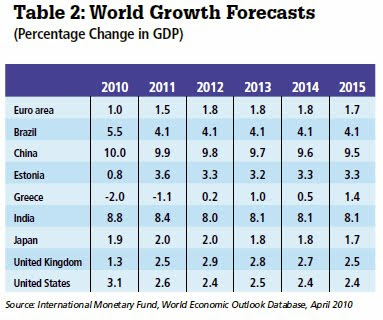 I wish the best of luck to Etonia.

- Similar optimistic tables/statistics were available on or before the entrance of Greece into euro zone.
- Therefore, I think it wise for Estonia to continue take lessons from Greece' follies and invest European aid to productive purposes.