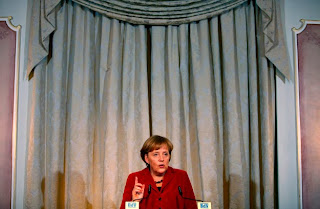 These are unhappy days for Europe: Countries are starving for credit, international experts are predicting the slow unraveling of the euro, and the continent's national politicians have felt compelled to defend their honor by way of references to belligerent incidents from the not-so-distant European past. And the unhappiest European at the moment may be the person most trusted to lead the European Union out of its turmoil: Angela Merkel, Germany's chancellor, who, caught between the dual masters of a dissatisfied German public and a roiling EU, lurched in too many directions and finally froze in place as the crisis progressed. Merkel's abdication of Germany's leadership in the EU over the past few months ranks as a catastrophe of the worst order: wreaking maximum political damage on everyone involved, while also risking continued long-term chaos.

"I can't remember a similarly disastrous set of actions since 1949 [the year that the Federal Republic of Germany was formed]," former German foreign minister Joschka Fischer told Der Spiegel magazine when asked to put Merkel's foreign policy in context. "In the past few weeks, Angela Merkel had her rendezvous with history. Unlike Helmut Kohl on November 2, 1989, or Gerhard Schroeder after September 11, 2001, Merkel blew it."