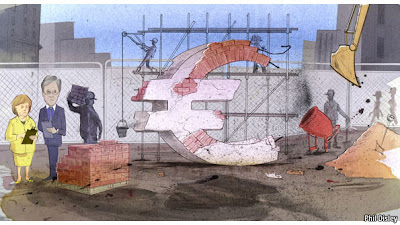 A promised huge rescue fund and central-bank help for indebted governments have eased the euro area’s crisis. The respite must be used wisely.

FOR weeks, Europe’s policymakers have stood accused of doing too little, too late as the sovereign-debt crisis that engulfed Greece threatened to spread to Portugal, Spain, Ireland and perhaps elsewhere. By May 7th, as yields on vulnerable euro-area countries’ government bonds rose sharply, there seemed to be a real threat that foreign financing for these countries would stop. That in turn raised fears about the exposure of banks to European governments and private borrowers. Europe’s Lehman moment, it seemed, might be at hand.

The European Union’s policymakers were forced to act with unaccustomed speed and unprecedented force. In the early hours of May 10th finance ministers, meeting in Brussels, agreed on an extensive scheme of repairs for the euro zone. The biggest stack of financial scaffolding is a “stabilisation fund”, worth up to €500 billion ($635 billion). This includes €60 billion to be financed by EU bonds that can be sold fairly quickly—as much as can be raised over three years without breaching the union’s budget ceiling. This element had to be approved by EU members, such as Britain, which do not use the euro, because their taxpayers would also be on the hook were the money not repaid in full. (It is an extension of a similar €50 billion fund for non-euro countries with balance-of-payments problems.) The stabilisation fund would be supplemented by up to €250 billion more from the IMF.

More
Posted by Yulie Foka-Kavalieraki at 2:41 AM